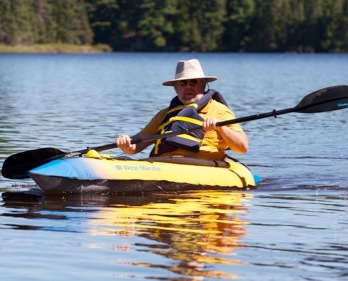 Artist, Rick Taylor, was born in Fergus, Ontario. He currently resides in Mississauga.

Even as a preschooler he loved to draw. His father Leslie Taylor, was a local sign writer, painting innumerable trucks, awnings and banners until the late sixties, when the family moved to Malton.

Although Rick’s preoccupation is painting, he is also an active cartoonist and illustrator. His autobiographical cartoon strip, The Blackboard Jumble has appeared for many years in a variety of publications. He illustrated the critically acclaimed comic book series Wordsmith and in the early nineties he drew Sandman Mystery Theater for D.C. Comics.
Rick also produced a large volume of short stories and sketchbooks for Caliber Comics, as well as the four issue espionage adventure, “The Silencers,” the supernatural thriller “The Raven Chronicles” and finally his own adaptation of Oscar Wilde’s “Salome.”

Rick’s graphic novel, “Growing Up with Comics” is his most recent published work.

A few years ago, Rick decided to devote much of his attention to one of his loves, the challenging, but rewarding medium of watercolour. His new work was quickly picked up by a number of collectors and Rick was soon represented by Nancy Poole’s Studio in Toronto. In recent years he has switched his focus to oil or acrylic on canvas.

In the last couple of years, Rick has been involved in a number of group and one man shows at the Frecklebean Café on McCaul Street in Toronto. He has also participated in exhibits with the Heliconian sketch group in Toronto. He is currently represented by the Artworld of Sherway, The Gallery Upstairs, Creations Gallery, White Wall North and the Westmount Gallery .

Rick and his wife Krista are avid travellers, and he has painted and sketched in the U.K, France, Spain, Italy, Portugal, Mexico, North Africa, Hawaii, South America, Israel, Egypt, and also throughout Ontario, Quebec and the Maritimes. Algonquin Park and Killarney, Ontario are favourite locations. In May of 2004 he fulfilled a lifelong dream and visited Arizona to paint the desert. He spent much of the summer of 2005 exploring and sketching in Newfoundland and plans to paint a large series of works based on his trip.

In January, 2014 the Government of Ontario purchased four of Rick’s paintings for their collection of Canadian art.

In his urban paintings, Rick captures the atmosphere and energy of older neighbourhoods. His goal is to evoke an emotional sensation in his landscapes and recreate the sense of joy and peace he feels in the outdoors. He writes, “I’d like the viewer to look at one of my winter scenes and feel they can see their breath or hear water flowing over stones”.